The Microbiology and Engineering of Sterilization Processes course was a lecture-problem workshop created by Dr. Pflug to increase proficiency in the basic principles of sterilization science in scientists in the pharmaceutical and food industries. The first course was held in 1975 and was held two to three times per year until it ended in 2015.

Sadly, the Microbiology and Engineering of Sterilization Processes course is no longer being taught. Thank you to all who participated throughout the years: all of the students, speakers, and those whose hard work made the course a success for so long. 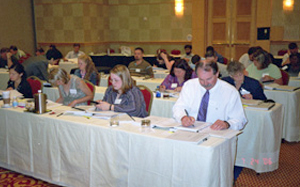 Click here for more student photos and instructor photos collected throughout the 40 year history of the M&E course.

This is the story of a 40 year adventure in teaching Microbial Control to scientists in the Pharmaceutical and Food Industry.

One of the advances in our society in the last 150 years was a better understanding of microorganisms and how important they are to us. Crucial parts of our microbial understanding were the discoveries of Louis Pasteur (1822 - 1895), a chemist who was able to preserve wine, vaccinate against anthrax, and treat positively against rabies; Joseph Lister (1827 - 1912), a surgeon who pioneered sterile surgery; and Robert Koch (1843 - 1910) the physician and bacteriologist who is considered to be the Father of organized bacteriology. The ideas and necessity for sterilization and sterile products originated from the need for sterility in medicine and food preservation.

In the time from about 1920 to 1960, great progress was made by Ball, Bigelow, Schmidt, among others, in the science of heat preservation of food; during the same period, the healthcare and pharmaceutical industries were advancing biological preservation. By the end of this era, steam sterilization technology had developed to a high degree.

In 1955, I joined the Agricultural Engineering Department at Michigan State University; I started a new course there called Microbiology and Engineering of Biological Systems.

By 1970, I had become involved with NASA and the Viking Mission to Mars and in projects with the FDA concerning low acid canned food (LACF), and in the microbial control area in drug production. It was through this work that I came to the attention of the Parenteral Drug Association and Mr. Kirsch.

In the early 1970’s, there were several national problems with microbial spoilage in food products and also pharmaceutical products. Microorganisms had survived in preserved products where they should not have been. That was a public health problem. The Parenteral Drug Association (PDA) board of directors were in agreement that their members needed to know more about microbial control in the pharmaceutical manufacturing area.

There were discussions about what, where, and how this new educational program would take place. Nathan Kirsch, a member of the PDA’s board and a man of action, and an officer in the Schering Corporation, contacted me at the University of Minnesota to help solve the problem. (At that time, I was already teaching a regular course of thermal biology at the University of Minnesota.)

After discussion with many, Mr. Kirsch decided that he would proceed alone. He invited me to teach an in-house program on Microbial Control at the Schering Corporation in New Jersey. During the fall I proceeded to create a special course on microbiology and engineering of sterilization processes for the technical people at the Schering Corporation.

Charlotte Carver and I gathered up our teaching supplies, slides, and notes, and carried them to the Schering Corporation plant in New Jersey; armed with several racks of 2x2 slides, Charlotte Carver operated the slide projector, I indicated the slide number that was to be shown and she showed the slide. We had available lecture notes along with handout material. At this faculty, with fifty Schering technologists seated at lunchroom tables, we presented a two day course dealing with microbial control in a pharmaceutical plant.

Mr. Kirsch considered the course a success. When word reached PDA of the success of the course, many PDA members wanted a course for their scientists. The PDA board directed Captain Pflag, Executive Director of PDA, to set up a course for the industry.

I was invited to teach an intensive lecture-problem course for pharmaceutical scientists; the course would be three days long and held at a hotel. The course would be limited to 35 students and would be held three or four times a year. At the end of each three day course all students that finished the course received a certificate of completion of the course signed by the course director.

In addition to teaching the PDA-supported M&E course in the USA, courses were given in Belgium, Brazil, Canada, England, Germany, Israel, Sweden, Switzerland, and Taiwan. In addition to teaching the normal PDA course, many pharmaceutical companies arranged to have special courses taught. From 2003 to 2015, the Baxter Corporation arranged for three courses per year to be held in a Baxter headquarters conference room.

Starting in 1977, I and my team on the fifth floor of the Shepherd’s Laboratory at the University of Minnesota worked rather continuously to upgrade our technical material and slides. We tried to update our materials every two to three years to meet changing technological and educational demands. We improved the quality of our slides: we put our materials on PDF files and moved from analog slide projectors to electronic systems using digital projectors.

In the first year I taught the M&E course, Captain Pflag was the administrator and Mr. Kirsch was there in support. By 1980, I could o longer teach the whole course alone and so we started to involve other food and pharmaceutical scientists; they each taught that part of the course which was their specialty.

Ann Rath carried the secretarial load for the M&E course from 1976 to 2015. She managed the office and carried out the secretarial operations. She was a most valuable person.

From 1980 to 1990, Dr. Larry Zechman was our right hand person in getting the project moving forward; he assisted in several of the European trips. Starting in 1997, Ann Nicholas carried a major part of the load.

The operation of the fifth floor of Shepherd Laboratories was carried out by many hands. Yvonne Heisserer was the leader of the group that included many undergraduate and graduate students. Chantelle Hart, Ann Smith, and Ann Nicholas were responsible for producing the Textbook, Problem Book, and other supplies used in the course.

It has been a pleasure to teach the students over the years and help enlighten them in the critical role of microorganisms in our society and the need for Microbial Control.

Students have come from all the States and from countries around the world. We estimated that about 5000 students have attended M&E courses.

Click here for student photos and instructor photos collected throughout the 40 year history of the M&E course.